Best Plane for the Bush?

What is the best plane for the Bush? I look at Aircraft mainly used by Charter Companies.

I love flying around Africa, and now Indonesia, into the smaller more challenging airstrips. The ones that take all the concentration you have to touch down at the very beginning of the runway and apply those brakes to stop just before going off the end of the runway. The ones that make you fly your vref speed as accurately as possible and that give just just a foot or 2 either side of your main wheels on touch down. These are the places that make my heart pump and is the reason I fly. I fly to challenge myself and get better every day, being able to fly to these places is the bush pilots dream!

So what do we all do it in? What plane and why? Here is a list of a few planes that I have flown or know of flying into these remote challenging airstrips.

The Piper Super Cub has to be one of the most popular Bush Planes around, I am pretty sure EVERYONE has heard of it. With many variations around now days the possibilities of this beautiful plane are endless. Needing only 350 ft for Take-Off and Landing it opens up a whole new world of airstrips or backcountry landing spots for their new pilots. Often fitted with larger tyres and with its rugged undercarriage it is able to handle the rougher unkept strips. The speed of the Super Cub is not going to win it any races though, it’s 150hp Lycoming pulls it along at a about 96 kts with a VNE of 120 kts and a super low 41 kts stall.
Payload is 820 lbs for the Normal Category and 570 lbs for the Utility Category.
This is however only a 2 seat aircraft, so this is more for the private guys who have the money and time to fly off into the wilderness to enjoy the true freedom of bush flying!
This tailwheel plane can be picked up for 60k USD to 120k USD used if you have a look around the internet, and like I previously said there are many similar types available in Kit form as well! 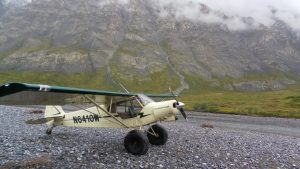 The Cessna 206 another workhorse of the sky. This plane is used widely through Africa, USA and many more places, they have even been used in the mountains of Papua, Indonesia by the missions to get to the remote villages.
Having 6 seats and a 1623 lbs useful load has made this plane very popular for the bush charter companies operating around Botswana specifically, they only require quick hops from their main base to the lodges they service, so having more load and the extra seats makes it the perfect plane. The C206 has a fixed undercarriage, this cuts down on the maintenance costs of the faster C210 which is also very popular around Africa. The 310 hp Lycoming pulls the C206 through the air at a acceptable 161 kts MAX (this figure I am sure is closer to 130 kts) with a range of 703 nm, a VNE of 182 kts and a stall speed of 57 kts.
The new C206 is kitted with the beautiful G1000, I have used these extensively in the C208 and it truly makes life much easier to stay ahead of everything and have much greater situational awareness.
The price tag may be getting a little high for a new one, however there are secondhand planes available on many trader sites out there, just do a google search. 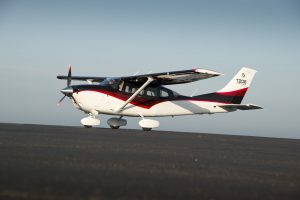 The Cessna Caravan is a multi purpose plane built by Cessna. I have been flying these for the last 2 years and have fallen in love with them. Their rugged build has made them perfect for those hard to get places in the bush or jungles around the world. This plane can comfortably seat 14 people including the pilot or can be set up for VIP travel, it has a 3692 lbs useful load. With one of the most reliable engines ever made the PT6 producing 867 shp on the EX version. Max operating altitude is 25000 ft, VNE 175 kts, stall 61 kts, cruise is about 195 kts (by the book). The takeoff roll is 1339 ft and landing is 1039 ft, with this performance not much is out of reach of the C208. Again Cessna has adopted the G1000 in this aircraft and like I said in the previous post is a pleasure to use, especially the autopilot if you have a long time at cruise. I have found flying the Caravan, once you get your head around all the new systems, one of the easiest planes to fly if you have previous experience with Cessnas, especially if you have a bit of a load on the back. The C208 hasn’t really had much competition, until the Quest Kodiak came along, I will look at that in this post as well. 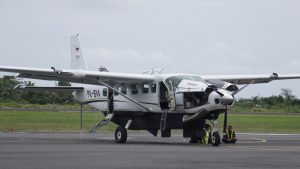 This rugged utility aircraft sometimes known as the Jeep of the sky is one of my personal favourites. This plane is used for skydiving, medical evacuations, survey and flying into the airstrips no other planes would handle. Its Stol capabilities are impressive with a stall of 52 Kts, takeoff over 50ft obstacle 1444 ft and landing over 50ft obstacle 1033 ft (by the book). Payload of 2642 lbs is easily loaded through the huge sliding cargo doors on either side of the fuselage. You however won’t be going anywhere to fast with its 550 shp PT6 only pulling you along at 120 kts cruise for 500nm (range, 870nm with aux tanks), but who needs to go fast when you are flying along a tight valley in the middle on the Papuan mountains. The Porter is kitted with the G950 making it very user friendly and enhancing the situational awareness when it matters. I have seen this plane do things that I never thought possible in aircraft, this is why it is my best!
Unfortunately Pilatus has discontinued this amazing plane, read more here, but you are still able to pick up secondhand ones if you have a look around. 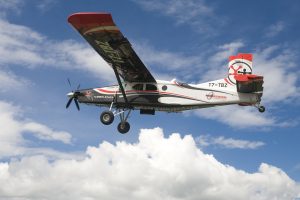 The Kodiak, competition of the Caravan, looks very similar to the C208. This utility aircraft is already being adopted in Africa and Indonesia, its STOL performance is pretty impressive with a takeoff roll of 934 ft and landing roll of 765 ft it easily gets into those small and hard to reach places. Stall speed is a little higher than the C208 at 60 kts. The PT6 gives 750 shp pulling it along at 183 kts in the cruise with a range of 1005 nm. The cabin area can seat 10 including the pilots, and once the seats are removed can carry a good load of cargo. The Kodiak is fitted with the G1000 like the Caravan which seems to come standard with the bigger singles these days.
I have personally not flown this plane, but have only heard good reviews. The fact that I keep seeing them more and more must be an indication that they are performing as advertised and wouldn’t be surprised to see them taking over some of the market share from Cessna. This again as the last 3 Aircraft are probably not for the private guy with a price tag of 2.65 mil USD, but for the charter guys this seems like a great option. 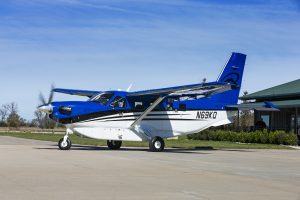 This is it for now, the 5 that I have looked at are the planes I am more familiar with and see day to day, if you would like me to add some more or look into different types please comment below or send me an email.